Three mature ladies will put to sea on stage at Market Drayton’s Festival Centre this Thursday. Atlantic Ladies tells the true story of three (fairly) local women who last year rowed across the ocean. On the opening night at Shrewsbury’s Wightman Theatre last week it was hard to say who was the more impressed —  playwright Chris Eldon Lee at the ladies’ achievement or the ladies themselves at his success in turning their adventure into an engaging and inspiring musical play.

The most striking difference is that Eldon Lee is an experienced writer with a flair for spotting strong stories, taking oral histories, and creating from them entertaining plays which flesh out the heart and soul of his subject matter. Arthur’s Plough and Silhouette, both set in Drayton, were good examples.

The Atlantic rowers, by contrast, began their adventure with no experience of rowing, no navigation skills, and no boat.

“I was afraid,” says one in a television interview at the start of the play. “I was nervous,” said another. “I thought I’d never have the strength,” says the third. Then they launch into a stirring version of the Gloria Gaynor song ‘I Will Survive’ – but collapse breathless at the end of their routine.

We learn that that their captain will be 62 when they row, and their average age will be 57, making them the oldest women to row across any ocean ever. One is a nurse, one a lawyer, one a midwife. Oh yes, and one of them suffers recurring pneumonia. 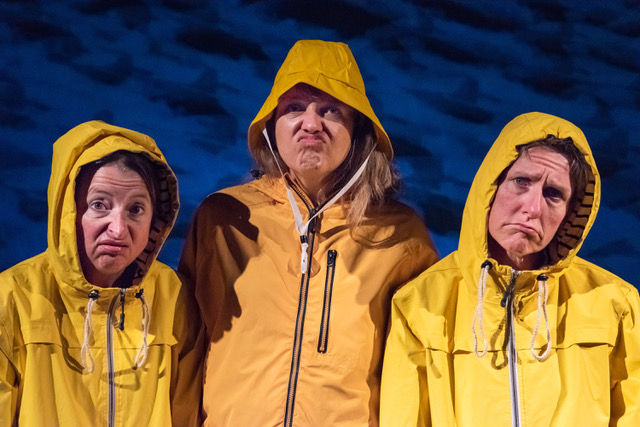 The first half of the play takes us through the ladies’ preparations and training, their naivety  pulling us on board when we hear, for instance, about Rule 72 – the compulsory inclusion of a body bag in their stores. And that in the course of their 3,000-mile journey they will lose a quarter of their body weight.

We share their growing realisation when they finally acquire their 7m by 1.8m boat that this is a serious endeavour. This is confirmed only five minutes into their first rowing trial on a Welsh reservoir, when they got stuck in a reed bed, and later when they struck a railway bridge.

So, like the rowers, the audience has plenty to learn. Pace is maintained with quick-cut episodes, cheering music, and lashings of humour, while characters are established and the scale of their ambition driven home. It comes to a head in a moving sung prayer attributed to Sir Francis Drake: ‘Disturb us Lord when our dreams have come true because we have dreamed too little; when we arrived safely because we sailed too closely to the shore… Push back the horizons of our hope.’

The second half takes us from La Gomera in The Canaries to Nelson’s Dockyard, Antigua, in a rowboat called Poppy that is very simply and effectively realised on stage. Of course it isn’t all about rowing. It’s about determination, inventiveness, camaraderie, and a great deal more. The three face waves as high as houses and a dramatic final day at sea that proves a gift to the playwright but felt like something very different at the time.

Nonetheless, you don’t get across the Atlantic without a great deal of rowing, and the cast don’t let us forget it. Jo Cox plays ‘Captain’ Di Carrington with a nicely balanced sense that she was doing something crazy, but being in the mid-Atlantic it would be crazy not to finish the task in hand. Christina Cubbin as Elaine Theaker toughs it out admirably as the ‘lawyer who isn’t ever fluffy’ – until an incident with a flying fish. And Sally Tonge as Sharon Magrath shows emotional sensitivity when she learns of the death of a friend whose charity she is supporting, and a different kind of sensitivity when demonstrating the intimate ‘bucket and chuck-it’ routine.

Tim Baker is the man-of-all-parts, from boat-builder to disco bouncer and Thor the Scandinavian swimming doctor to Whitney Houston (don’t ask). He deserves every laugh he earns, and there are plenty.

Sally Tonge doubles as acoustic guitarist in some of the musical numbers, including a spirited version of the Proclaimers song which becomes ‘I could row three thousand miles’. The three also give us ‘Sisters are doing it for themselves’, ‘Touching the Clouds’ and – at the height of a furious storm in December – ‘We’re all Going on a Summer Holiday’.

In a lovely touch, Sally is joined on guitar and keyboard by Brian Carrington, the real-life husband of rower Di. 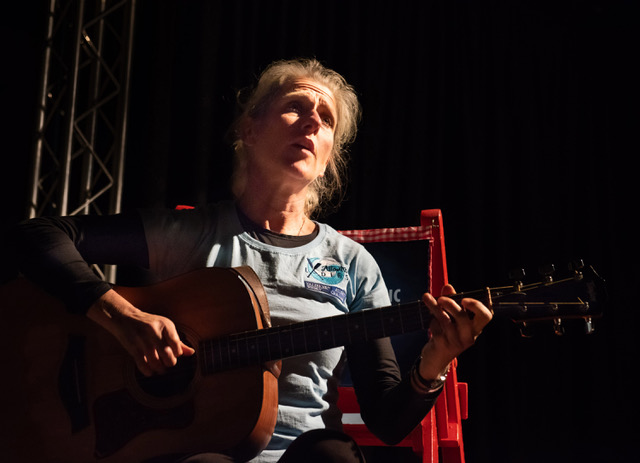 The Atlantic Ladies made it to harbour and a heroes’ welcome on the far side of the Atlantic after sixty days rowing. Seven of the other twenty-seven boats from seventeen countries in the 2017 Talisker Whiskey Atlantic Challenge retired before finishing, having faced some of the worst conditions in years.