Mayerling was the hunting lodge where Crown Prince Rudolf of Austria-Hungary and his mistress Countess Mary Vetsera died in a suicide pact in 1889. In Kenneth MacMillan’s dark and disturbing ballet telling their story, their extraordinarily passionate pas de deux were like nothing I have seen before in ballet. 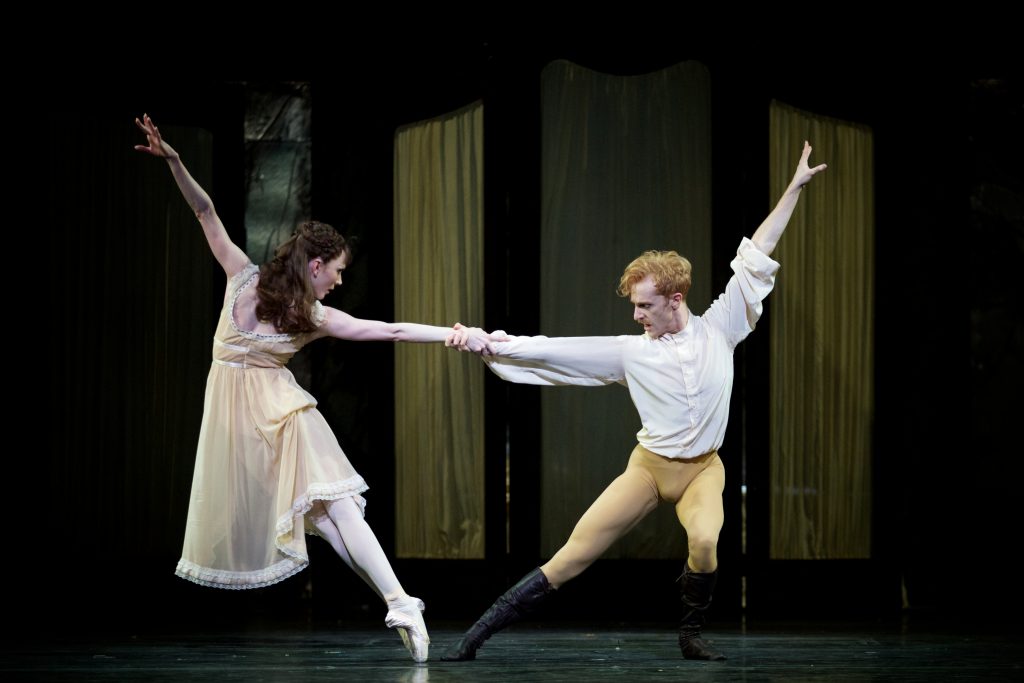 Sarah Lamb, dancing Mary Vetsera, repeatedly threw herself at Steven McRae’s Rudolf. He would hold her above him in the most daring and unexpected positions before she slithered her way down head first, clinging to his torso and then dragging herself between his legs, making one tight form as if glued together. Then dashing apart, then hurling themselves together again. It was breathtakingly stunning; beautiful and terrifying. The chemistry between them – or alchemy – was explosive.

Streamed to the Festival Centre from the Royal Ballet just days before we commemorate the centenary of the First World War ending, the ballet had an extra poignancy. For the political fallout from the suicide pact at Mayerling boosted nationalist movements leading to the assassination in 1914 of Rudolf’s successor as the Habsburg crown prince — and the start of world war.

These consequences were foreshadowed in scenes set in the archly conservative and cynical Viennese court, and the political lobbying of four Hungarian hussars. But the ballet very much focussed on Prince Rudolf’s personal decline and tragic end.

Desperate for his mother’s love, Rudolf was rebuffed by her coldly. Forced into an arranged marriage with Princess Stephanie of Belgium, on their wedding day he flirted cruelly with her sister. On their honeymoon he took Stephanie to a brothel and she left in disgust as he hooked up with his regular courtesan. And then his former mistress Countess Larisch introduced him to the young and impressionable Countess Mary Vetsera.

In one emotionally fraught pas de deux after another the ever-more-desperate Rudolf danced with his mother, his wife, his string of lovers. There was hardly a moment he was off stage. Increasingly unbalanced mentally and obsessed with death, with Mary Vetsera he found passionate adoration and an intensity of romantic infatuation that led inexorably to their terrible deaths.

Never for a moment did dance distract from the story. For McRae, like the entire company, acting was inseparable from ballet. It griped like a vice.

MacMillan created Mayerling in 1978, setting his choreography to an amalgam of music by Liszt. The third of his twelve Transcendental Etudes, ‘Paysage’, and the eleventh, ‘Harmonies du soir’, provided the basis of the two dances between Rudolf and Mary Vetsera. Macmillan died of a heart attack in 1992, backstage at Covent Garden at a revival of Mayerling. The production we were privileged to see was a fortieth anniversary revival.