The concert at the Festival Centre on Saturday night was both sweet and cheesy. The classical candy and popular cheese on offer made a feast for the ears, cooked up beautifully by musician  André Rieu. 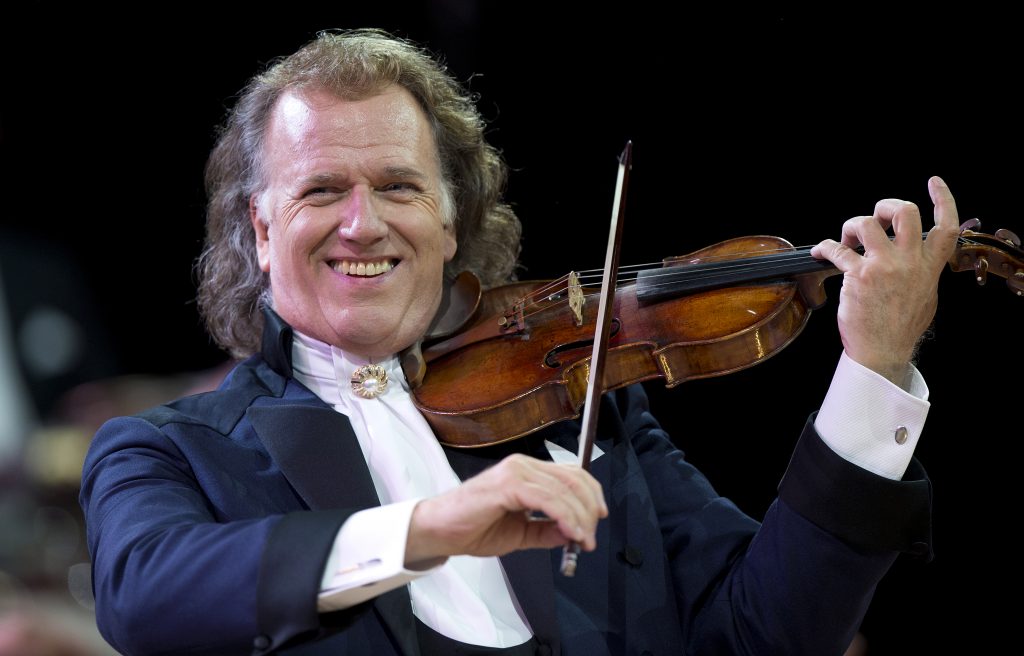 This was the renowned violinist’s annual concert from Vritjthof Square in his home town of Maastricht, streamed live to Market Drayton and cinemas no doubt similarly packed with his many fans worldwide. André’s theme was Amore, My Tribute to Love and as a taster for what was to come, we saw stewards delivering floral bouquets ‘with love from André’ to one couple in the audience celebrating their 40th anniversary, another on their honeymoon. There were tears before a note of music had been played.

The concert opened with Seventy Six Trombones as André’s sixty-piece Johann Strauss Orchestra, from thirteen different countries, took to the stage. I warmed hugely to the internationalism of it all. The stage looked like a classical temple to music, with Greek muses on the pediment and a projected backdrop of ever-changing images to accompany the songs – from Granada to a Tuscan street-scene to a Swiss chalet dripping snow.

A stirring Nessun Dorma was delivered by three tenors from Tasmania, Hungary and France. Two sopranos from China gave us a crystal-clear Pie Jesu from Andrew Lloyd Weber’s requiem (while drone technology and 29 cameras picked out ethnic Chinese in the audience).

“When you listen to music, especially when you listen together,” André told us, “you’re happier. Your brain produces a sort of cuddle hormone. It’s a scientific fact.” A camera honed in on a distinguished looking gent near the front of the audience, introduced as the neurologist who had ‘proved’ it.

By the second half, popular began to push classical aside. We had a dramatically arranged Caro Nome from Verdi’s Rigoletto, alongside Lara’s Theme, You Raise Me Up, a traditional Dutch clog dance, and Lloyd Weber’s Amigos Para Siempre. When his orchestra launched into a Strauss waltz, André stepped off stage to ease a 104-year-old from her wheelchair and dance a few steps. “A waltz a day keeps the doctor away.”

Now the drones were picking out romantic kisses in the audience, not wet eyes. André  announced his last tune, then started his encores. After six I stopped counting. With Zorba the Greek and surprise-guests Los del Rio delivering their hit Macarena we watched dancing in the aisles. For Can’t Help Falling in Love, massed lights swayed. Glitter and golden streamers fell from above.

It had segued into a party, and although there was nothing impromptu about it – every titbit was table d’hôte – the feel-good factor was undoubtedly filling.